So what makes a game “fun?”

Several journalists have claimed that “fun” is in the eye of the beholder, and so personal that there’s no way to gauge it and as such we may as well stop trying to even consider if a game is fun or not when reviewing them.

However, this isn’t exactly true…

There are certain things which are inherently rewarding to players in a deep, satisfying psychological manner, and there are other things which are especially bad which suck the fun out of playing, and just turn to frustration.

These aren’t magical concepts, and if one studies game design, as in the actual design of the mechanics of a game, one finds there are certain things you can do to make a game fun. Typically, this is done by either specializing in one area that a target demographic prefers, or covering many different points.

To be blunt, I’ve studied game design for over twenty years, now, and there’s no way this is all going to even remotely fit into one article. I could literally fill a wiki on this topic alone. No, not a wiki article, an entire wiki. There’s a reason this article is numbered 001; we’re going to need a bare minimum of three digits worth of articles to cover this topic.

Hey, it’s a complex topic and covers so many topics it’s hard to believe, and near impossible to know all of it. As such, this is a large part of why so many games fare poorly: there are many colleges which now offer “game design” courses, yet virtually none of them cover what makes a game fun, how to implement mechanics, nor how to avoid pitfalls in the design phase.

So, for now, I’m going to cover a single facet of fun in a fairly basic manner, and we’ll worry about other aspects of fun in later articles.

First off, player psychology is the biggest tool that a designer has to work with in making a game fun. Our brains are set up inherently to enjoy certain effects which promote our survival. Most of us can say that having a good meal is fun, but burning your hand on the stove is not so fun. Universally, we can agree on what isn’t fun – the getting burnt bit, but we have a bit harder time agreeing on what constitutes a good meal due to personal taste.

What player psychology does, is isolates the theoretical models behind why players find certain things enjoyable. For example, the original Diablo 1 team for Blizzard, including Bill Roper, knew that there’s a very fundamental aspect which made the game so bloody addictive. At the time, they called it “Kill –> reward”. You kill stuff, you get a reward. You kill bigger stuff, you get a bigger reward. We know of this more commonly as “Push button, receive food pellet.” 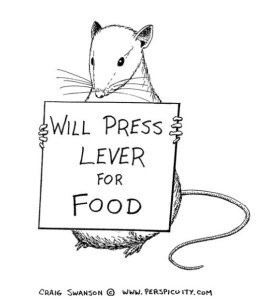 The concept is actually a lot more complex than one might think, on many levels, but the basic gist of it is simply that players enjoy being rewarded for their effort. If you reward them without effort, it’s not very satisfying. On the other hand, if they work too hard for too little in return, then they feel like they’re wasting their time.

The problem here, is that each player has a different threshold for how much effort they want to invest for how large of a reward. This is the single, largest dichotomy between the “hardcore” and “softcore” players, to be blunt. The goal of both sides are honestly the same: improvement over time, but the desire for the difficulty is different. A good game will pick one of these two groups to cater to, and will revolve its mechanics around providing what that demographic desires. A truly great game will manage to provide something for everyone in this respect.

The fact of the matter is simply that we, as humans, want more. We always want more. A better house, better food, more money, more knowledge, more self-actualization. In fact, the whole hierarchy of needs, thanks to Abraham Maslow, hinges upon this very concept of “more” in endless scope. We, as a species, will seek to better our lives, and as such, it will never be “good enough,” no matter how much we achieve. We will eventually want a new challenge to better ourselves as individuals, or as players. As we grow better, we’ll need bigger challenges, and hence one sees why RPG elements are so vastly favoured: they provide a numerical description of the player getting better over time.

If you start off fighting little tiny goblins, then you’re going to want to fight giants and demigods by the end of it, and those bigger enemies had better feel stronger, not just with bigger stats like more health and damage, but also by having more interesting attacks. Sure, the goblin can auto-attack all they want, but if you’re fighting something akin to Zeus, he’d better have some really nasty attacks so that you feel like you accomplished something when you finally bring down the god of lightning.

This is the key behind progression – improvement over time, and facing greater challenges. It truly isn’t about the destination, though, but rather the journey. As long as a player keeps getting larger rewards for harder content, they will continually have fun… though there are some odd limitations, here.

For example, a player will want bigger rewards to take more effort; more time, more skill, more investment. With each new stage, the player needs a bigger challenge, but a bigger challenge must also require a bigger investment. Due to the nature of such, however, eventually there comes a point when a player will simply not want to invest any more time and effort as the plateau between challenges will grow too great, either by taking too long to grind to the next level (clicker style games, for example), or by simply reaching a personal skill cap wherein it will take such intense training that it becomes more of a job than a game to progress any further, because the player must literally reach a professional level of play to progress.

In all situations, the problem’s the same, and it doesn’t matter if they’re just trying to reach a new high score, or to gain a rank in a MOBA, the player will simply reach a point where they’re just not having fun anymore because the increased effort is too great for the reward, and this is guaranteed for everyone; even professional players have their limits where it stops even being fun and just becomes about winning, but even then, the winning isn’t even that fun anymore as sacrifices to their personal life begin to be required to continue to compete.

Everyone has a breaking point. Everyone. Some are just so high they may never encounter the challenge which will break them, but it still exists as a point where the effort will simply be so great it’s not worth the reward at the end.

If a game were to maintain a consistent, steady progression rate, with no increasing growth rate in both difficulty and reward, the game would stagnate very quickly. As such, there must always be a gradual slowing over time, and equally as such, all games must come to an end of how enjoyable they are without playing any other games. Some get around this by being worth going back to after a rest period, but every game has a limit on how long a player will play it, even professionally.

PvP games have the advantage of players fighting other players, so they can continually add a new challenge over time at minimal cost, though these same games also have a tendency to be rather frustrating, which means not all players enjoy them. You see in any PvP game, there must be both a winner, and a loser, and any matchmaking system will try to level a player’s skill to fighting others of equal skill, leaving them at a 50/50 win/loss ratio over time. This has the negative effect of meaning that players can’t continually feel like they’re truly progressing in the short run, and does cause a great deal of frustration to lose. When a player ceases to increase their skill further, likely due to plateauing out because of failing to understand an intrinsic aspect of the game, the progression stops and the enjoyment ends.

For progression styles games, such as virtually any MMORPG, any clicker flash game, or even a game like Dungeon Defenders, the fun stems primarily from the feeling of progression over time. In fact, many of these games actually have little to almost no gameplay involved at all. Taken to an extreme value, the “game” Progress Quest literally involves the game playing itself with absolutely zero input from the player after character creation. These games are still fun, however, because they sate the player’s psychological need for progression.

This is only one type of “fun”, however, and there are many other ways in which a game can be fun. Each individual will crave a different mixture of which types of fun they want, but invariably, they will want a minimum in the frustrating aspects, and a maximum in the aspects they prefer. As such, there’s no one “right” way to make a game fun, but there are a lot of ways to make a game “wrong.”

Over the next few months, and likely years, I’ll be adding additional articles describing various ways in which games are made fun, and ways in which fun is removed from a game. As with anything which involves the human element, your mileage may vary, as each individual have different preferences and personal values, but one can reasonably assume that, if they remove as many frustrating elements from a game (such as fake difficulty) and instill as many good elements (like progression) as possible, the game will probably be fun. At least for the target audience with those preferences and values.

Creating fun games is not an exact science, but there is a science to it, even if there’s also an artist’s hand as well. As such, I’d personally like to see more developers investing in their game design leads, and more schools to dedicate classes towards teaching the concepts of what makes a game fun, because really, a game that isn’t fun simply isn’t worth playing, no matter how pretty the graphics are. This is also something that I feel the “fun is irrelevant when discussing video games” journalists have sadly misunderstood, and needs to be discussed.

As no one else is teaching game designers and players what to look for in designing and picking a game to play, I’ll just have to do it myself.

This first episode was only a taste of where we’ll be headed, as we have literally hundreds of concepts to cover, so I’ll see you next time on “What makes a game fun?”