Twenty.oz » Game Reviews » This War of Mine Review

This War of Mine Review 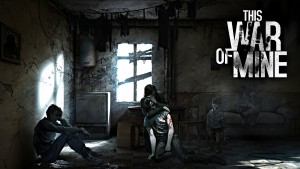 When I read through game reviews, or even write my own, I often times differ in relation to popular opinion. Its easy to form your opinion about the game, based on the individual look at the visuals, audio, game play and so on. This time, I took a few days after playing through this game, and I found myself in a weird state of mind, where I was simply not sure of what to say about it.

This war of mine claims at least as far as Steam tags go, to be an Atmospheric Survival War Simulation. Going against the grain unlike many other games that use these descriptive tags, This War of Mine, places you in the shoes of a civilian, or a group of civilians that are trying to survive the war raging around them.

You start the game, with a random number of people (usually 3 or 4) inside a 3d cutaway of a not quite ruined tenement.  Each one of your survivors has its traits and flaws. Well, I wouldn’t really call them flaws, but more like bad habits. Traits like smoking for instance. Some of them are good runners, other sneak pretty well, some are more combat oriented while on the other side you have characters like Cveta who simply loves children. Now you can imagine the joy and happiness when in your crew is somebody with 8 inventory slots and who Loves Children, instead of say Marko, who can carry 15 items inside his bags and is a faster scavenger.

But that’s beside the point, as you are given a few random civilians and it is up to you to command them in order to basically survive as much as possible.

The time inside the game is divided in two parts, Day and Night.

During the day you can use all of your survivors in order to build stuff around the shelter, sleep, in case they were on guard the previous night, eat the stocked up food, or simply sit around and think (maybe whine?) about the better days. Once you are done going through the basic needs of any pre or post apocalyptic household, such as: a stove, few beds, a radio and a weapons workbench, you can start gathering supplies for the more exquisite items… in terms of a bombed out war situation. But sadly, if I mention a few more I will pretty much cover the whole building inventory of the game, and that kind of feels quite small. I didn’t expect The Sims in a game of this genre, but adding more things to build would have made the game a bit deeper in it’s gameplay.

The gameplay at night, is when the really fun part of the game started, at least for me. You can pick one of your characters, usually the one with the best trait / biggest backpack, and send them out to one of the locations in town to try and scavenge resources. This is where the games size wasn’t an issue for me, since there are truly a lot of different places you can loot. Schools, Hospitals, Markets, Construction sites, are just some of the locations, which will try to lure you in with the sign saying Lots of Materials or Lots of Food. But in reality it will be 3 guys with handguns waiting to score whatever you were bringing to this happy encounter. All joking aside, it does create quite an emotion when you go into the house of an elderly couple and must choose between leaving their medicine or materials that they need to survive, or taking them back to your crew because you really do need them. It did leave me affected when I returned back to mye shelter with my bag full of their belongings, but that feeling was gone fast upon learning my own shelter had been raided during the night and when other NPC’s tried taking my stuff.

The game does explain the survival nature of being in a war. You either do whatever it takes to survive, or its game over, there are no alternatives to that. One thing I did have kind of an issue with, is that it got the feeling of playing The Sims pretty fast. When you play The Sims, or at least back when I used to play The Sims, all you did with the character you have, was try to keep all of his stats up. Stats such as hunger, happiness, social and w/e, so you can send him to a job and hopefully he will do good enough to get a promotion, and get you even more money for even more stuff.

And even tho the genre and atmosphere of This war of mine is totally different, that is how it made me feel just a few hours into the game. I would take care of whoever was tired, hungry or depressed, so the night can come and I can go scavenge more materials, to make more stuff. So the next day I can be a little bit better and making them less hungry, tired or depressed. I know the point of the game was not to have an epic adventure, but it kind of succeeded more then it should have on that front, so it never engaged me the way games usually do.

I’m not saying its not a good game, nor do I think its not fun, but it just didn’t leave me wanting for more, after just 10 hours of gameplay. The game seems to be regularly patched, fixed, and if we are lucky we might even expect more content to build on this good foundation that they have. So there is no reason to think this game won’t just get better, which for the price of 18.99 on steam, its worth being checked out for sure.

A Game Design Student, Senior year, from Serbia. Gaming purist of the new Age, quick to judge but also one to let his hype grow and build up in expecting a new marvel. Mass Effect. Neverwinter Nights. Elder Scrolls. - tell me I am wrong ?
View all posts by Aleksandar Markovic →
Tagged  11 Bit Studios, Simulation, Steam, Survival, This War Of Mine, War.
Bookmark the permalink.