The Holy Trinity of Video Games 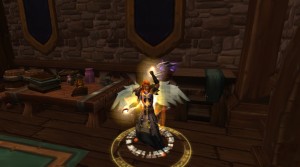 In most games, we are aware of different classes.  The visuals are pretty easy to come up with.  The knight in shining armor, the smiling rogue, and the priestess that keeps people going beyond what they thought possible.  These examples are the most highly recognized by just about everyone.  And while we might tire of their examples being used all the time, they are easy to recognize and hard to beat.  This has come to be known as the Holy Trinity of video games.  And it is heavily relied upon by both Role-playing games and massively multiplayer online games.

Let me dispel the misconception of the Biblical version of the Holy Trinity, right now.  What I am referencing is the Tank/Healer/DPS triangle, in video games.  For those who are not familiar with these positions, let me clarify.

Tank:  This is considered the character/class that is meant to be on the receiving end of the vast majority of damage dealt by an enemy.  Nicknames that people might be familiar with are:  Meat shield, bullet sponge, agro magnet, and worthless plate wearing bastard.  These are the guys in games that take a licking and keep on ticking.  Or fighting, as the case may be.  In most games, these characters have a higher agro generation than all other classes, and usually have some form of shield for protection.  (IE:  Protection warrior, protection paladin, guardian druid, blood-spec death knight, shield specialist vanguard, or Jedi Knight guardian)

The main job of the tank is, and always will be, taking the attention off everyone else.  This is done through the agro generation, as well as taunts.  While this character will be doing damage to the mob/boss, that is often far less than a DPS.

Healer:  This is considered the character/class that keeps everyone alive.  The vast majority of their time is spent keeping the health up of everyone around them, and preferably keeping that health as close to maximum as possible.  Notable nicknames include: My hero(ine), group savior, the group’s favorite person, and  you fucking bastard (usually, but not always, followed with the phrase of “You let me die!”).  These are the classes that everyone loves when the group does well, or absolutely hates when the group has problems.  A good healer can often even compensate for a bad tank.  (Examples of healer classes are:  Jedi sage, restoration druid, holy/discipline priest, holy paladin, and restoration shaman)

The main job of the healer is, and it is often argued that the only job of the healer is, to keep the health up of all party/group members.  As stated above, a good healer will often be able to compensate for the lack of proficient tanking.  In some instances, a good healer will even be able to keep up a DPS character that has very little in the way of protection, but keeps taking the agro away from the tank.

DPS:  These are the damage dealers.  Their main, and arguably only job, is to remove the health from mobs/bosses, in the quickest and most efficient manner possible.  The phrase DPS is an acronym for Damage Per Second.  (I prefer Damage per swipe, but why quibble over semantics?)  While these characters can offer a little extra healing to the group, or even take agro over a mob/boss, they do not do it any where near as well as just dealing the damage that kills the targets.  Notable nicknames include:  agro thief, heal sponge, and a whole host of other derogatory nicknames that I will not mention.  DPS is often immune from criticism of their performance, unless they are so far below the amount that it keeps the group from progressing.  They are also the easiest to replace, given a bad performance.  (Examples of DPS classes are:  Gunslingers, hunters, mages, gunnery commandos, and just about anything that does not fall into the other two classes)

DPS is often the easiest classes to find, as almost everyone has a DPS class spec.  And during leveling any character in an MMO, it’s often easier and faster to use a DPS class.  DPS is usually fun, if you have a decent healer and tank.

I am pretty sure, by now, someone is saying something to the effect of “Great!  Who cares?  Why is this important?”

The importance of the triangle is fairly evident, given a little bit of thought.  The tank’s job is often multi-faceted.  While they focus on keeping the attention of the mob, they also have the added benefit of having the most damage mitigation.  This allows for a great deal of survivability, in the face of large amounts of damage.  The damage mitigation takes the form of parry/block/shielding/etc.  A good tank knows how to survive longer, with sustained damage being taken.

The healer is there to help keep the others alive.  In higher end dungeons or raids, this is essential.  It also adds the element of risk to the party going in.  In this, I mean that developers can make fights harder for groups, if there is someone dedicated to keeping the party up.

At this point, if I wasn’t a hard core gamer, I would be thinking “Why is all this important?”  The answer to that is both simple and complex.  Short answer:  To increase the different number of mechanics that can be used in boss fights.

The best example of this can be seen in Star Wars: The Old Republic.  Specifically the Infernal Council fight.  This fight is tuned for all three types.  While each one can be done with other classes, IE: a tank could take on a healer’s fight, the best idea is to use the ideal class.

While this might have been able to be done with all of one type, it makes the fight more interesting.

Being able to tune fights, such that it’s harder to get through but possible with a bit of practice, it allows for a richer experience in games.  And while there have been attempts to remove portions of the triangle, it quickly becomes apparent that this isn’t an easy accomplishment.

Often, when trying to break this trinity up, games tend to be much harder and fail at being enjoyable to players.  Or they tend towards being too easy, which keeps players from playing the game again.

While it might be possible to remove the triangle from the game, it greatly simplifies the job of making the game fun, especially when there are a larger number of people in a group.  With this diversification of roles among players, it makes the job of the developers a bit easier.  As an example, let us take a look at longer fights.  The longer a fight goes, the more heavily it depends on a healer.  This is not to say that a tank isn’t necessary in long fights, as healers have a limited resource to draw upon for their healing.  However, the longer a fight goes, the more important a healer is, due to damage taken by the group.  A similar example. with a tank, would be if a boss has an attack that would kill a target that doesn’t have high damage mitigation.  All this can easily be factored in for a fight, given this particular style.

Another good example of how much better having the trinity makes the experience, also comes from Star Wars: The Old Republic, with tactical flashpoints.  This is a type of dungeon or group instance that can bring any class, including all four slots being filled with DPS.  The only thing it does, is make the instance quicker and easier.  Almost no skill is involved, and there is hardly any chance of failure, especially with healing stations provided that keep everyone near max health.

And the reason that it is called the holy trinity of gaming is because it allows for interesting mechanics and moments where people might actually panic from the death of a player, a mistake that could have dire consequences, or even bringing the whole party’s health to very low levels without dying.

And let’s face it.  Having different classes in a group makes it much more enjoyable.  There is nothing quite like having that “Oh $#(^!” moment, and wondering if your group is actually going to make it through the fight.