One would think that the MOBA genre is quite over saturated. You`ve got Dota, LoL, HoN, Smite and probably a dozen more similar games out there, competing in the same Arena. At least that is what I thought, and it seems I was wrong. Blizzard, one of the massive game development companies, known mostly for their Warcraft and Starcraft series, decided to push into the market, by bringing us “Heroes of the Storm”. So far the … Read More 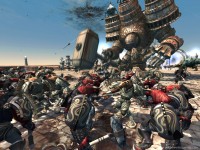 A few years ago, MOBAs were just beginning to surface as actual games.  Defense of the Ancients: Allstars, the Warcraft III expansion custom multiplayer map had elevated the concept to a large enough playerbase to support an entirely new genre. At that time, quite a few started to spring out of seemingly nowhere, from Heroes of Newerth, to League of Legends, to DotA2.  The overall feel of each new MOBA was largely the same, however, … Read More