Evil Dead 2013 – Fit for Halloween, or trumped by Michael Myers? 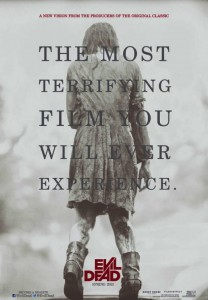 Debatable claim. Possibly most gore-laced, however.

It’s nearly Halloween, and gamers everywhere are pulling out some cringe-worthy titles for the occasion; both in the comedic and the creepy sense.  I, of course, am no different, and noticed the remake for Evil Dead was available on demand, and my mother wasn’t at home to tell me it was too scary for the cat to watch.  Yes, the actual cat, not myself.  And no, this isn’t the first time that would have happened; she claimed that The Hobbit: An Unexpected Journey was too scary for my cat.  To be honest, I don’t think Mishka was too scared by The Hobbit, nor, it would seem, by the Evil Dead remake.  Then again, he is a cat, after all. 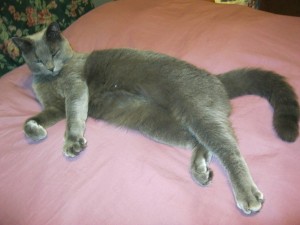 You wouldn’t think it just by looking at him, but this cat has nerves of steel.  Slept through the whole thing.  Also, this is your “trigger warning” – if you scroll down past this point, it’s your own damned fault.  The rest of the pictures aren’t of cats.

I will confess that I had no idea what to expect going into the Evil Dead remake as I dug through my list of Halloween-themed movies I’d yet to watch.  Would the remake would be straight up horror like the original Evil Dead, or a horror-comedy as Evil Dead 2, was?  Perhaps I should expect an action-comedy akin to Army of Darkness?

Well, it turns out that the 2013 version of Evil Dead is pretty much a remake of the original Evil Dead of 1981, and they went full-up horror with it.

Or perhaps “gore” is a better genre?  I don’t think “gore” actually constitutes a genre in and of itself, but if gore ever is classified as a genre, Evil Dead’s probably going to be the first on the list, of that there’s little doubt.  I found the occasional jump-scare to be present here and there, but there really wasn’t much in the way of psychological thriller nor suspense.  Overall, pretty much everything that was going to happen could be predicted significantly in advance, so there really wasn’t much for fear factor from that direction of attack.

Is “gore” a genre? I dunno, but I know I feel hungry for freshly severed tongue, yum!

Now, this may sound like a bad thing, yet oddly, I didn’t mind.  The remake of Evil Dead followed quite closely in the footsteps of the original movie, yet I feel that, overall, it handled itself better as a whole.  The characters had better motivations for staying at the cabin, the explanation for why the Necronomicon Ex Mortis was present was significantly better (though they never called it the necronomicon, and it lacked the face on the cover), if a little flawed, still, and the graphical and special effects quality was distinctly higher end, and not just by the standards of the day. 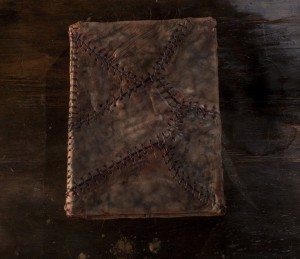 “The Book of Evil” 2013. I guess they weren’t allowed to call it the Necronomicon Ex-Mortis? Either that, or they just thought “Book of the dead of the dead” sounds silly when translated.

The overall plot was handled much better this time around, and as a whole, it actually felt like a surprisingly good homage to the original, which isn’t surprising, given that each of Sam Raimi, Bruce Campbell, and Robert G. Tapert, namely the director, lead actor and producer from the original, were present to keep a watchful vigil over the remake.

Virtually all of the original scenes have some counterpart in the Evil Dead remake, and it’s clear that they weren’t just trying to rehash the idea for more money, but actually wanted to tighten up the script, enhance the overall quality, and make the same movie better than the first time around.  All things considered, I think they may very well have succeeded.  Evil Dead, the remake, had a tough act to follow after the original, and they managed to pull off the same overall feel, and pay proper homage to the original, while still making it different enough that it actually worked as its own movie.

You didn’t honestly think they’d leave out the chained-up cellar door, did you?

Now… is it SCARY?  Depends on what frightens you, I suppose.  There were a few moments where I certainly felt a little ill watching it, as some of the graphic gory scenes touched a bit of a nerve, but I don’t think I ever really felt scared.  Even two days later, however, I’m still thinking back on one scene with an arm being pulled off by force and it still creeps me out, but I just don’t find the gore thing to be that scary, just kind of ew, for lack of a better term.

Some people find gore to be scary, and for those who do, Evil Dead’s remake will scare the bejeebuz out of you, pretty much guaranteed.  If you’re like me, however, and are looking for a psychological thriller laced with mindfucks the whole over, you’re really just not going to find it here.  Jump-scares, as mentioned earlier, are also at a minimum, and the vast majority of the “horror” aspect is derived from similar traits as what one would expect from a small-scale zombie film, relying on that creepy factor of being attacked by something which looks like a close friend or family member.

There is one scene from the original that gets remade with a better explanation this time around, and it may especially unnerve female audience members.  I had been wondering if it would be included, and… well, that anticipation probably lowered the fear factor substantially by seeing it again, albeit differently.

Yeah, you know which one I’m talking about.

Actually, I think that’s one of the largest problems with the Evil Dead remake, strangely enough.  It follows very closely to the original.  So closely, in fact, that anyone who has seen the 1981 version will more or less already know every scene before they happen.  There’s a lot of new content, and a lot of it done differently, but it’s so similar that it still feels like watching the same movie a second time almost.  In a way, I almost feel like they paid too much homage to the original, to the point that it actually made it hard to be scared by it if you’d seen the 1981 release.  It certainly feels like an Evil Dead movie, however, there’s no arguing that bit, so kudos where it’s due.

There are still a few plot holes, but the story’s a lot more coherent this time around, and as horror movie plots go, it’s actually pretty good in that regard.  Evil Dead’s remake still isn’t perfect for plot, and there’s a few points which didn’t make any sense, but they were few and far between, and only really get noticed if you’re paying close attention, so I have to give them that.

This scene makes a hell of a lot less sense five minutes later.  Nice reference to Evil Dead 2, but it retcons something rather important via plot hole.

If I had to choose between the 1981 and the 2013 releases, though?  I’d definitely recommend the 2013 version instead.  It’s basically the same movie but just plain better, even if the purists will probably hate me for that.  To be blunt, Evil Dead 2013 did what Evil Dead 2 failed to do: to remake the original.  Evil Dead 2’s probably the better movie, though, but perhaps that’s just my perverse sense of humour showing in that I love horror-comedies, and the maniacal laughter of the deer head amused me more than it had any right to.

I was a little sad this wasn’t in the movie, but as a straight-up horror, I guess it’s understandable.

Regardless, it’s Halloween tomorrow, and I have to recommend Evil Dead to be on your list of movies to watch.  It really is a good choice for Halloween in general, and even if you’ve seen the original, it still has enough new parts to be worth the watch, and it has that feel as though you’ve watched it before, but it’s just as good as it was the last time.  I somehow doubt Evil Dead 2013 will have the staying power of Army of Darkness, but really, what wasn’t produced by Mel Brooks which does?

So, in my final assessment, whether you’ve seen the original 1981 release or not, the 2013 version of Evil Dead is well worth the watch this Halloween, even if gore doesn’t scare you.  The claim of it being “The Most Terrifying Film You Will Ever Experience” may or may not hold true, however, depending on what kind of horror you find to be scary.