The Call: Survival In The New Domain A Journey into Killing Floor 2’s Co-op          The night sky is no longer dark. Instead, looking out of the window, What should have been a cloudy, dark night had long since become orange, with the lights of a thousand burning embers rising up into the sky, singing their song of chaos that had been ripped from the once peaceful streets of Paris. The wind … Read More

Making a game is something you put your heart and soul into, yet in the end, to do so at a professional level instead of as a hobby requires that someone foots the bill for food, shelter, heating and so on. It’d be nice if we could just get the best people to make the best games, but reality dictates that we need to pay our employees. There are a lot of ways to do … Read More 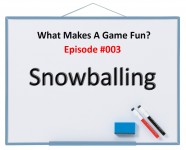 Now, this’s a bit off the topic I’d been going to cover, but it’s pertinent to the first two episodes of the “What Makes A Game Fun?” series. So what’s the topic that I’m beating around the bush on today? Why, snowballing. No, no, not THAT kind of snowballing… ew. It’s also best if you don’t ask yourself why I know that term. No, I mean the kind of snowballing which refers to the effect … Read More

If you were lucky enough to stumble upon my previous article, or simply get a HotS key before it entered Beta, you were able to experience and enjoy this game before that judgement day of January 13th. If not, here is a link – /heroes-of-the-storm-a-very-playable-alpha/ Now… On the 13th of January, HotS entered closed Beta, and came one step closer to a finished game. Now beware that its only a step closer, and still quite a … Read More

Taking a chance on a 20.00 early access game sometimes pays off. The Long Dark being developed by Hinterland Studios out of Canada is such a game for me. It isn’t finished. It isn’t nearly finished. It’s graphics are not high fidelity. Yet, while stylistically minimal, they suit the game just fine. They just work for me…those stylistically minimal graphics that resemble a Matisse or Paper Cutout Illustrations. Illustrations that capture the cold and loneliness … Read More